If one has worked with Entity Framework for a while, sooner or later it becomes clear that refactoring logic into separate methods is hard, because Entity Framework must transform the code one writes in Linq to Entities into SQL. Therefore, extracting logic in EF into method calls will compile, but give a runtime error. The solution is to use the library LinqKit, created by brothers Joe and Ben Albahiri. It is available as a Nuget package: install-package LinqKit or at the following web site: LinqKit

The following simple example shows how it is possible to create a reusable predicate separated into a method of its own and call this method in Linq to entities code. Make note of the use of the AsExpandable() extension method that transforms the DbSet into an IQueryable by returning a wrapper that allows this. The code is run inside LinqPad. Make note that LinqPad has got inherent support for PredicateBuilder, but the LinqKit DLL was added as a reference. Also the namespace imports added where: System.Linq, System.Linq.Expressions and LinqKit. Press F4 to set up the additional references and imports in Linqpad.

The following images shows the output. Make note that Patient here is a table in the context of my project. The data shown here is test data (not real pasients of course): 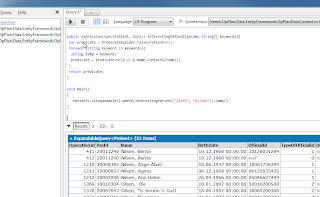